Twists and Turns: How the Pretzel Evolved into One of the Favorite Snacks Today

Twists and Turns: How the Pretzel Evolved into One of the Favorite Snacks Today

When you think of the humble pretzel, it might remind you of childhood. Getting one when you go to the mall or amusement park is always a treat. A pretzel can be hard, soft, salty, or sweet. But one thing’s for sure — it’s delicious. So how did the pretzel become the snack that everyone loves? Here’s a brief look into the cultures that shaped it.

Twists and Turns in History

Before it created thousands of franchise opportunities in the food industry worldwide, the pretzel went through twists and turns in history. If you’ve helped make a pretzel before, you’ll know that an authentic one is made with just water, flour, and salt. This is because it originated from the Catholic Church’s strict implementation of Lent in 17th century Europe.

Fasting during Lent prohibited the consumption of meat, dairy, and eggs. People were left with no choice but to create bread out of whatever allowable ingredients they had. The result was a baked bread twisted into a knot, known to Germans as “brezel.” Later, the humble pretzel was given by monks as a reward to children who recited Bible verses correctly. For centuries, it also served as nourishment for the poor.

The pretzel’s success in Germany eventually reached other countries, including the Americas. Immigrants introduced pretzels to the US when they settled in Pennsylvania in 1710, and the rest was history. The first pretzel bakery was even established there a hundred years later. Its owner, Julius Sturgis, claimed to have invented the hard pretzels kids used to bring with their packed lunch. If you want a genuine pretzel experience, visit Pennsylvania, where about 80 percent of American-made ones are produced.

People have reinvented the pretzel over the years. Its basic recipe has led to many innovations from local bakeries and franchise chains. When ordering a pretzel today, you need to be more specific than just saying “soft” or “hard” pretzel.

These are the snacks you’d find in the supermarket. They’re small, crunchy, salty, and often come in packages. While they’re usually savory, some hard pretzels are sprinkled with sugar or dipped in chocolate. They also vary in shape. Apart from the usual twist, hard pretzels also come in nuggets, logs, and little sticks. 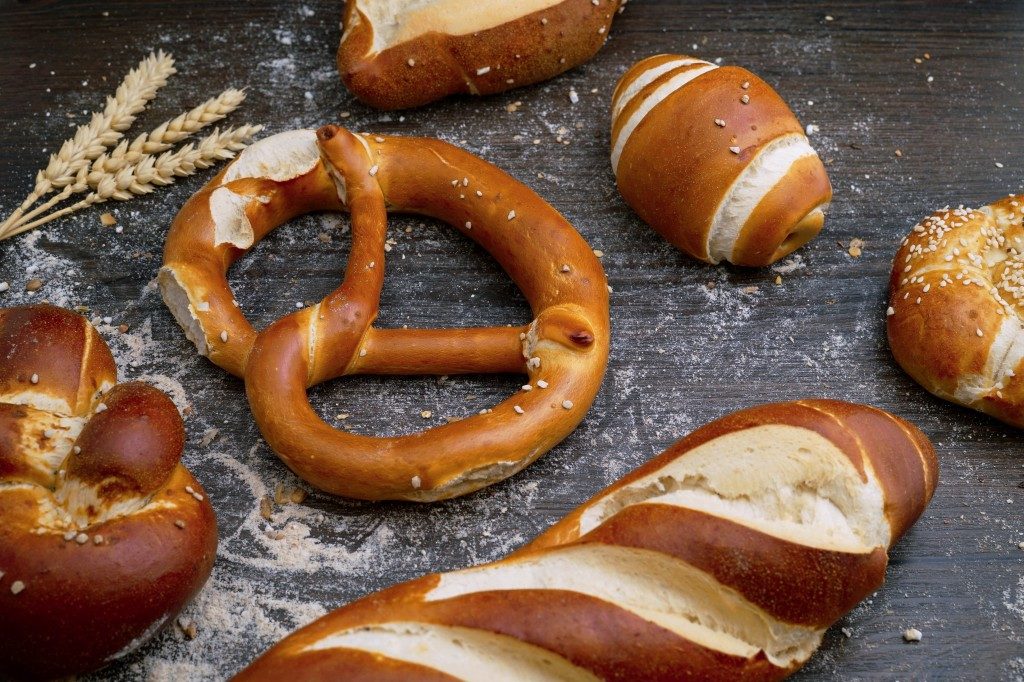 Soft pretzels are closer to the look and texture of the traditional “brezel” made hundreds of years ago. They’re the kind you see in shops in shops like Auntie Anne’s or your local bakery. Like their crunchier variant, soft pretzels come in various flavors, shapes, and sizes. Usually coated in cinnamon and sugar, soft pretzels can be enjoyed as a savory treat, as well.

Over the years, people have been dipping soft pretzels in mustard, cheese, and even sour cream. The pretzels have also evolved into a vessel, being used as a substitute for hot dog buns or base “crust” for pizza toppings like pepperoni.

Today, modern pretzel shops and bakeries are making fresh-from-the-oven twists for a fair price. Even mass-produced frozen and snackable ones are relatively cheap. Like any food item, the pretzel continues to evolve through the years, but one thing remains constant. It’s food for all, regardless of religion, nationality, or culinary preference (it’s suitable for vegans, too!).