The Starbucks Drive Thru Concept: A Coffee Chain Innovates

The Starbucks Drive Thru Concept: A Coffee Chain Innovates

Businesses must adapt to changing times — or they run the risk of losing customers. Adaptation is especially necessary when world events force industries to apply new practices that ensure consumers’ safety. One such world event is the spread of COVID, which has strained the unprepared and refined the creative.

And among the businesses that has adapted amid social distancing rules and shutdowns is Starbucks.

The Starbucks Drive Thru Operations 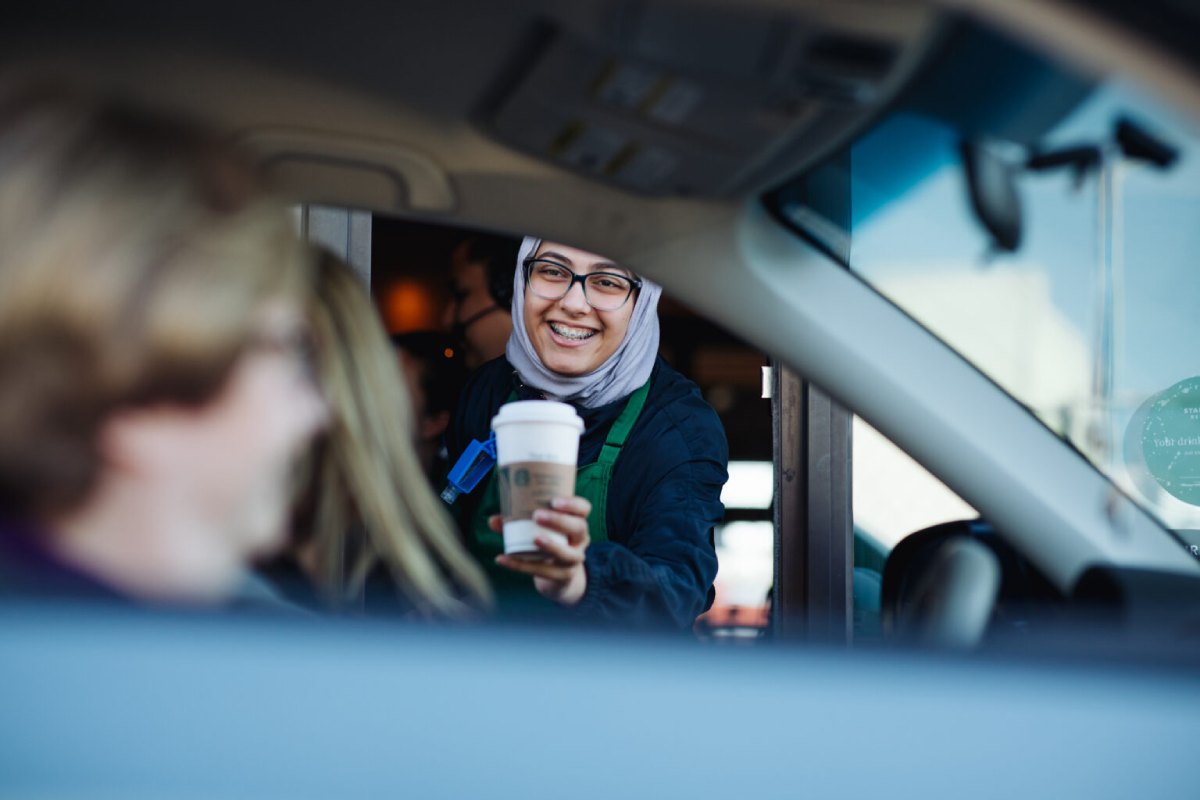 The Starbucks drive thru has been operational since 1994. The coffee chain first began doing drive throughs in Southern California, testing out the market. During its first few years, Starbucks’ CEO and president, Jim Donald said that the drive thru outlets posted higher sales at about $1 million, than the traditional stores, at $715,000.

At the end of 2005’s fiscal year, Starbucks drive through outlets took up 15 percent of the coffee chain’s 7,300 stores across the US. By 2010, drive thru Starbucks stores rose by 40 percent at over 2,400. The popular coffee chain saw that those outlets were driving over half of the brand’s cash contribution. So it made sense to grow this side of the business.

Today, with changing consumer habits, Starbucks has expanded its drive thru stores.

What Percent of Starbucks Business is Drive Thru Now?

About 35 percent of Starbucks in the US have drive throughs. In response to impressive sales from its drive thru stores, top management is scaling up growth of this business model.

Starbucks’ interim CEO Howard Schultz revealed during an earnings call that they are adding drive throughs to 90 percent of new Starbucks stores. The company intensified its plans in 2021 when long lines became an issue at some of Starbucks drive through stores. As part of its short-term efforts to remedy the situation, the company offered curbside pickup at 2,000 locations.

Like every other business, Starbucks recognizes where it must invest to ensure continued growth and relevance in an increasingly competitive market. Since it exploded in popularity, the coffee chain brand has contended with other national chains and neighborhood cafés. The competition became so challenging that Starbucks in 2019 moved to close 150 underperforming stores in the US.

Still and all, the Seattle-grown brand dominates the market with Tim Hortons, Costa Coffee and Lavazza Coffee. But even a thriving business must never rest on its achievements.

Why are so Many Starbucks Drive-Thru Only? 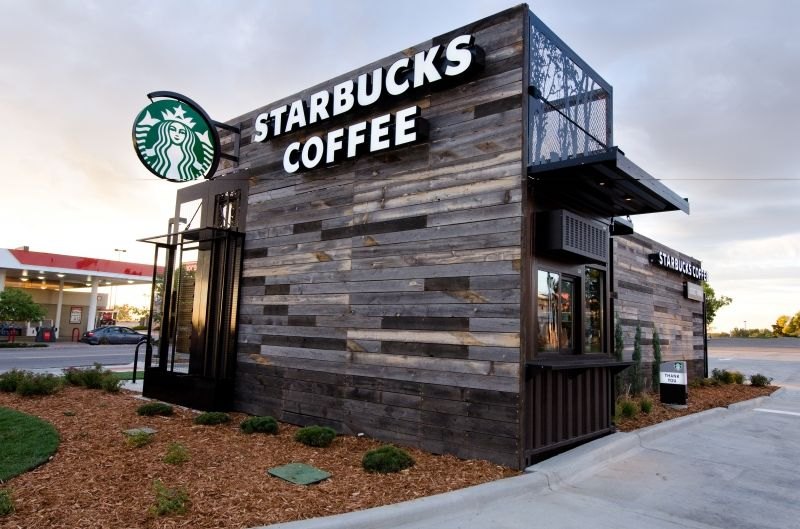 When the idea to add more drive thru outlets made its way to the C-suite level, it wasn’t received with open arms. The hesitation was rooted in the branding of the Starbucks and the perceived effect of a drive through feature. Since only fast food chains seem to have them, top management thought that a Starbucks drive through would project that image.

So the team tasked to looking at improvement opportunities had an uphill battle in convincing top management. They did initial improvements in select drive through Starbucks. Then, they tracked and measured results. Eventually, those improvements and results became “proof of need” that C-suite executives needed to invest in drive-thrus.

Because innovation is at the heart of the brand’s operations, the closest Starbucks you see may only offer drive through service. More may be coming because the company plans to close 400 stores in the US and open repositioned stores with new formats. This is not limited to drive thru only Starbucks, but also potentially pickup only locations.

How Does the Starbucks Drive Through Work? 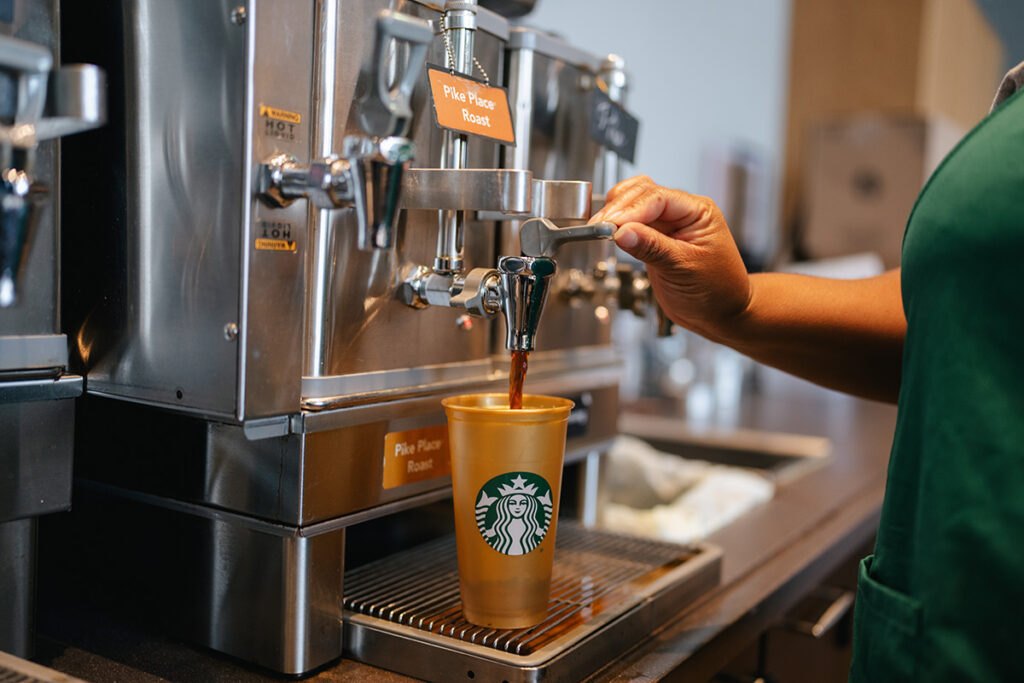 Key improvements to any business must always be tied to the current goals. In Starbucks’ case, it’s making sure the drive thru store delivers on customer needs in a way that its sit-in store does. That would mean providing the same sort of Starbucks experience people have come to know.

So every drive through must not only feel a bit more refined — even world class — than your average café; it must also be easy and efficient. The easy and efficient part starts even before customers get to the drive thru with the Starbucks app. Customers can order ahead. When ordering ahead, you can skip the screen or the box and pull in to let the barista to know you’ve ordered using the app.

The Starbucks drive thru works in a similar manner as any drive through store:

Except some drive thru Starbucks will feature a screen where you can talk live to the barista to place your order. A digital board shows the store’s menu with limited-time offers and relevant offers.

Beyond the Starbucks Drive Through

Starbucks isn’t putting all of its eggs in one basket. Although the drive thrus are doing brisk business for the brand, other options for ordering are being improved.

Customers can get their frappuccinos and baked goods through Starbucks delivery. Ordering may be done in through the app or online. People can pickup in-store, curbside or at a drive thru. Payment is even done in multiple ways through different devices, including the Apple watch and a Garmin.

Peter Mortenstein is a personal financial consultant and a veteran day trader and hedge fund manager. After working the gritty Wall Street Market for over a decade, Peter decided to leave the high-stakes world of stocks behind and decided to open up his own financial consultancy company that offers free financial literacy education to underprivileged youths. Peter is the editor-in-chief of Michbelles and he wants to make sure that every article that comes out is geared towards helping people manage their business and their finance better, as he has seen what happens when sharks take out mom-and-pops when they smell trouble! In his off days, Peter likes to go fishing with his wife (who does not enjoy it) and his 10-year-old (who loves it).
All Posts »
PrevPreviousAre You Starting a Restaurant or Café?
Next10 Employee Engagement IdeasNext
Scroll to Top
Go to mobile version